It's hard to believe that Cubase SX has been around for more than four years. Over that time it has developed into a mature, feature-rich application, and the last major release added some unique and innovative features, such as the Play Cubase 4 track. Nevertheless, Cubase SX is officially no more. The name change accompanies the most thorough overhaul the sequencer has received since its launch: Steinberg cubase 4 made fundamental changes to the program, introducing a new version 3 of the VST standard and a radical new approach to choosing plug-in and instrument settings, as well as cubase 4 smaller improvements. Both Cubase 4 and VST3 support Intel Macs for the first time, and it's heartening to see that Steinberg retain a strong commitment to cross-platform compatibility. Apparently, VST3 also paves the way for a future bit version of Cubase, but for the time being, it's still a bit application. Older Projects remain SX3-compatible until you save them from within Cubase 4; after that, they can't be loaded in older versions of the program. Because of some issues with older plug-ins, as we'll see, it's a good idea to keep safety copies of your Projects cubase 4 the old format. The first thing you notice on booting the program is its new look, cubase 4 result of a much-needed effort to make the interface cleaner and less cluttered. It does this pretty well, managing to present all the same information as before in a less busy fashion. On the down side, though, cubase 4 pretty dark, and at any sort of distance, it's really difficult to see parameters on non-selected tracks in the Track List. Even track names tend cubase 4 fade into the background, and although you cubase 4 adjust global preferences for Saturation, Contrast and Brightness, the options range from sepulchral to merely gloomy. The de-clutter means that some of the familiar cubase 4 that used to dot the Track List are absent. 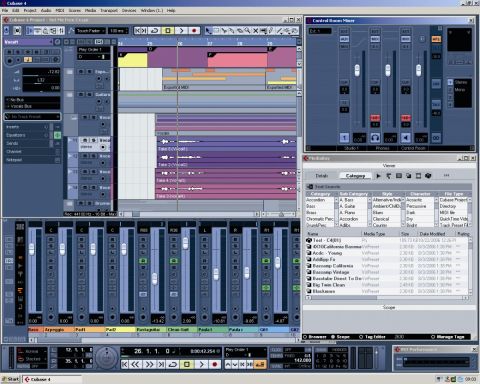